Welcome to the start of choosing the best Kilimanjaro routes and your journey to the ‘Roof of Africa’. Tanzania’s Mount Kilimanjaro, affectionately known as ‘Kili’’ is Africa’s highest mountain at 5895m. Kili is also the world’s highest free-standing mountain and its towering snowcapped, symmetrical cone is a world-recognised African image.

A world heritage site, the whole mountain is designated a national park and Kilimanjaro National park covers an area of some 755 sq km, consisting of vast areas of montane forest with unique moorland flora and alpine desert higher altitudes Climbing Kili is the adventure of a lifetime for many visitors to Tanzania.

As the highest ‘walkable’ mountain in the world, the trek is not technically a climb but is, nevertheless, a serious challenge. It is undertaken by people of all ages but should not be attempted without some physical training/preparation.

Mt Kilimanjaro is situated on Tanzania’s northern border with Kenya and while Moshi is the nearest large town, it is accessible from Arusha (1-2 hours by road) and Nairobi (6-8 hrs by road)

The mountain consists of 3 extinct volcanoes – Kibo, Mawenzi and Shira. Kibo is the tallest, its summit named Uhuru, and the destination for trekkers ascending Mount Kilimanjaro.

Here are the best Kilimanjaro routes for your next trekking challenge. 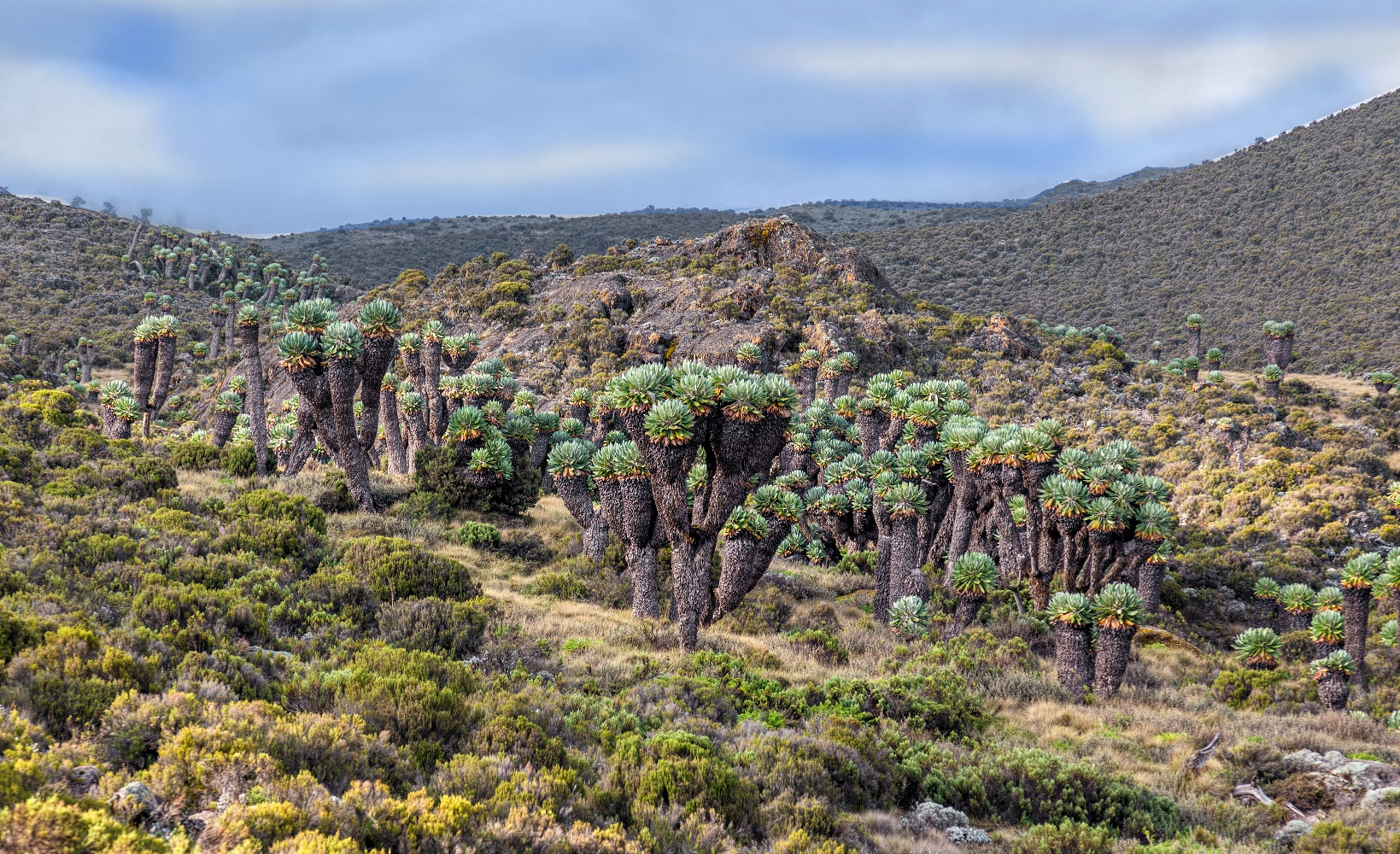 Considered the most scenic route on Mount Kilimanjaro, Lemosho is the route of choice for our reader. It has an ideal balance of beautiful scenery, low crowds and a high success rate. Our favourite route.

This is one of the least well known yet beautiful routes up Kilimanjaro, your efforts will be rewarded with a unique scenic splendour that is not seen on the other commonly traversed routes.

The start is west of the other gates, and you pass through the Lemosho Glades where you may view some of the game in this side of the park (Buffalo, elephants and some other big game animals.) It is not unusual for climbers to be accompanied by an armed ranger on the first day.

By day 4, climbers join the Machame route. This route is often referred to as the “Whiskey route” is better suited to the slightly more adventurous hiker. Unlike the Marangu route, in which you sleep in huts, you will sleep in tents on this route.

However, all your equipment and supplies will be carried up the mountain by porters and delicious meals will be made for you each day.

Most climbers choose to use 7 days to climb (although 6 days is also possible if you lose the acclimatisation day). However, acclimatisation is the key to success with this mountain so we always recommend that those who are worried should opt to take their time

Known as the “Whiskey” route, Machame is the most popular route on the mountain. The Machame route is scenically stunning and varied. However, due to the heavy crowds, it loses some of its splendour.

You will have a seven-day climb, which passes through some of Kilimanjaro’s most famous landscapes. It’s an excellent route to the summit and one with very high success rates.

The climb starts at Machame gate, ascending through Afro-montane forest and then into the heath zone and on to the edge of the remnants of the Shira volcano.

The route circumnavigates the main peak, Kibo, passing some spectacular features such as Shira Plateau, Barranco Wall, and Karanga Valley on the way to Uhuru Peak via Stella Point. Kilimanjaro’s newest route offers excellent views from all sides of the mountain. Also, as the longest route, the Northern Circuit has the longest acclimatization time, giving you the highest chance of reaching the summit.

The Northern Circuit Route is the longest route on Kilimanjaro, a nine-day trip initially ascending Lemosho route on the western side of the mountain up onto the Shira Plateau before reaching the Lava Tower, then heading north and circumnavigating the main summit massif in a clockwise direction and joining up with the Rongai route.

The summit is then climbed from the eastern side of the mountain and the descent is straight down via the southern Mweka route.

Understandably this is also known as the Grand Traverse or the 360 Route and offers the complete Kilimanjaro experience in terms of all the habitats and the views of the mountain from all sides.

The long journey has excellent acclimatisation and stunning scenery with views across the southern flanks, western forests, the northern plains to the Kenyan border and the arid eastern slopes. The paths are comparatively quiet and less used.

Also, the altitude gain each day is less than on other routes, with a gentle gradient until reaching Kikelewa or Third Caves camp, therefore over nine days, the likelihood of altitude sickness is significantly less.

Yet the overall length of the route is 96 kilometres, not much more than the other routes. An alternate route which summits directly up the northern slopes from School Hut is about 79 kilometres.

Being more expensive, the Northern Circuit is the least visited but it’s the best option for climbing Kilimanjaro without the crowds. 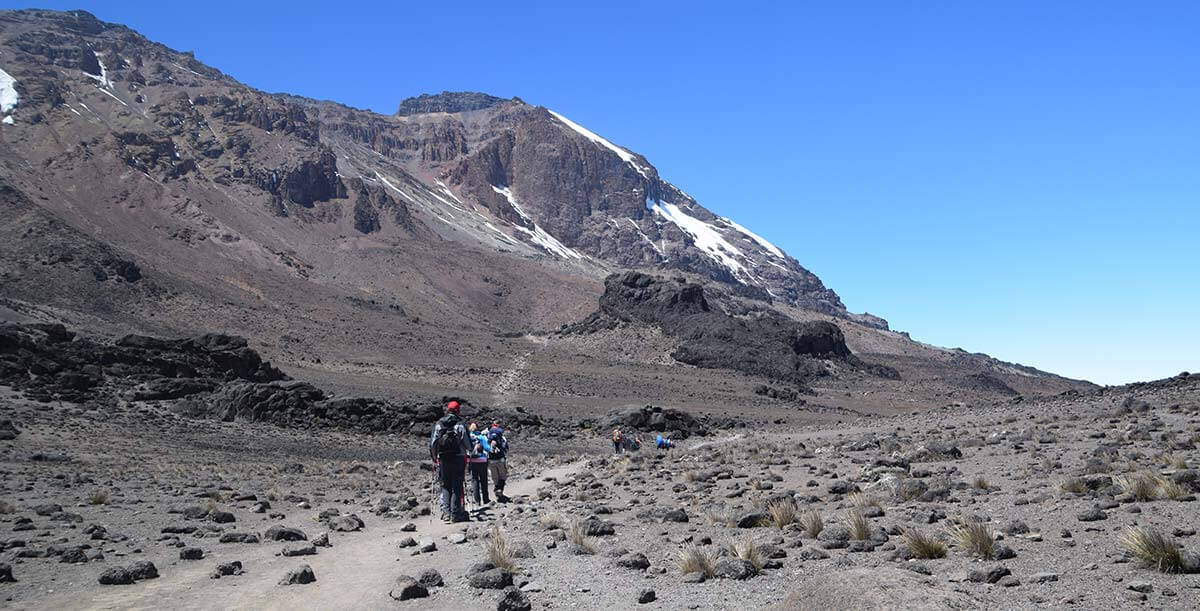 As the only route that approaches Kilimanjaro from the remote north, Rongai has fewer visitors and a more gradual ascent making it a great, quiet alternative to Kilimanjaro’s more challenging routes.

Kilimanjaro Rongai Route is designed for the fittest trekkers with previous altitude experience. No matter what route you take you will be left in awe of this colossus of a mountain. Kilimanjaro is underestimated each year with less than 50% of people making the summit.

The route takes six days minimum to complete, although seven days is recommended. The descent is down Mweka, on the south-east side of the mountain. Because the starting point is far from Moshi, it is more expensive to climb this route due to the added transportation cost of getting climbers to the gate.

Scenically, Rongai is beautiful because it travels through an unspoiled rain forest and remote wilderness area. However, it is not as scenically varied as Machame, Lemosho and Shira.

Rongai is ideal for those who are not confident in their ability to hike over steeper paths, those who want to avoid traffic, and those who want to enjoy a quieter hike. It is also preferred when climbing during the rainy season because the north side of the mountain receives less precipitation. 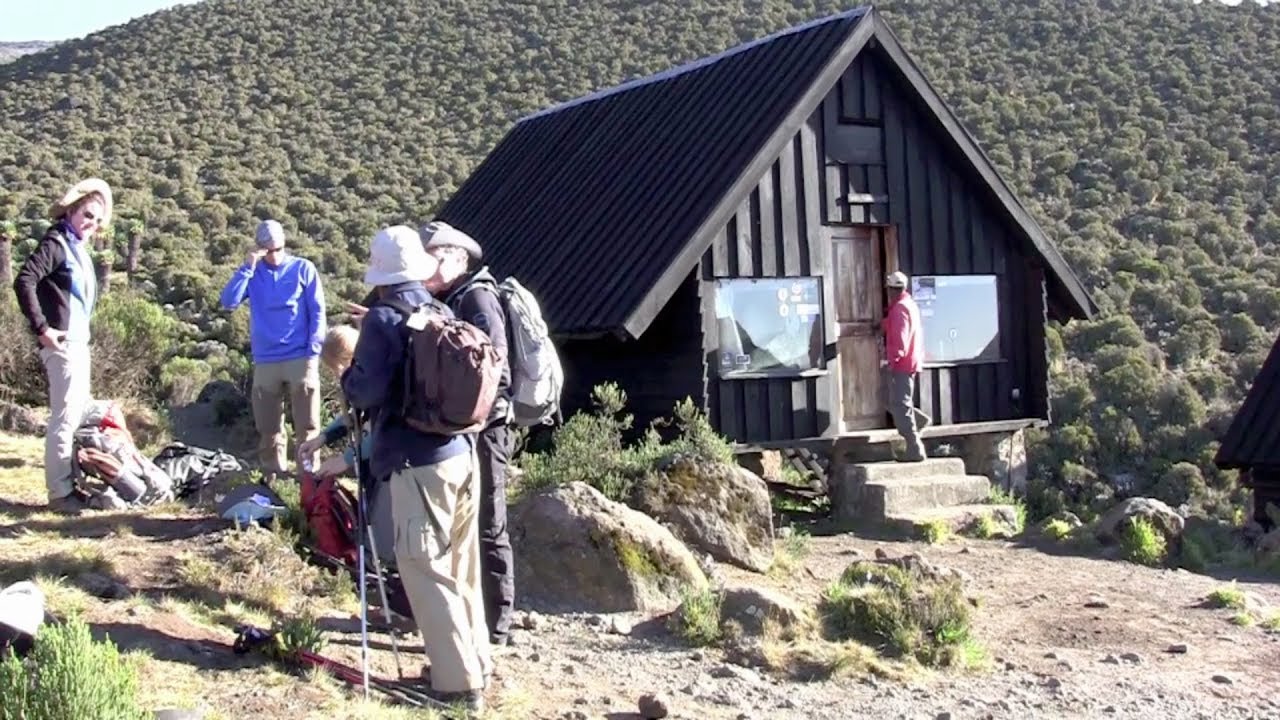 The Marangu Route is the easiest route to the summit of Kilimanjaro, sometimes called the Coca-Cola Route. The Marangu route takes you at a gentle pace through forests, moorlands and then across.

The Saddle, a high-altitude desert separating the main summit, Kibo, 5896m, from craggy Mawenzi, 5149m, to Kibo Hut. From here an early start is made for the ascent to Uhuru Point (the highest top of Kibo).

The path zigzags up steep screen which is easier to climb when frozen. The views from the crater rim at Gillman’s Point at dawn can be spectacular. Uhuru Peak lies a further 1h 30min around the rim.

Because of its relative ease compared to other routes the Marangu Route is the most popular and has the best facilities. This is the only route with the comforts of solar-powered sleeping huts and comfortable beds at every camp.

The huts are communal, with each bunk having a foam mattress and pillow. There are 60 beds at both Mandara and Kibo Huts and 120 beds at Horombo hut.

Mealtimes are often shared with other groups from all over the world, providing lively and energetic mealtimes. Bathrooms and running water are available at the lower two huts and basic latrines are available at Kibo Camp. Soft drinks, bottled water and even beer are available for purchase at some of the huts. 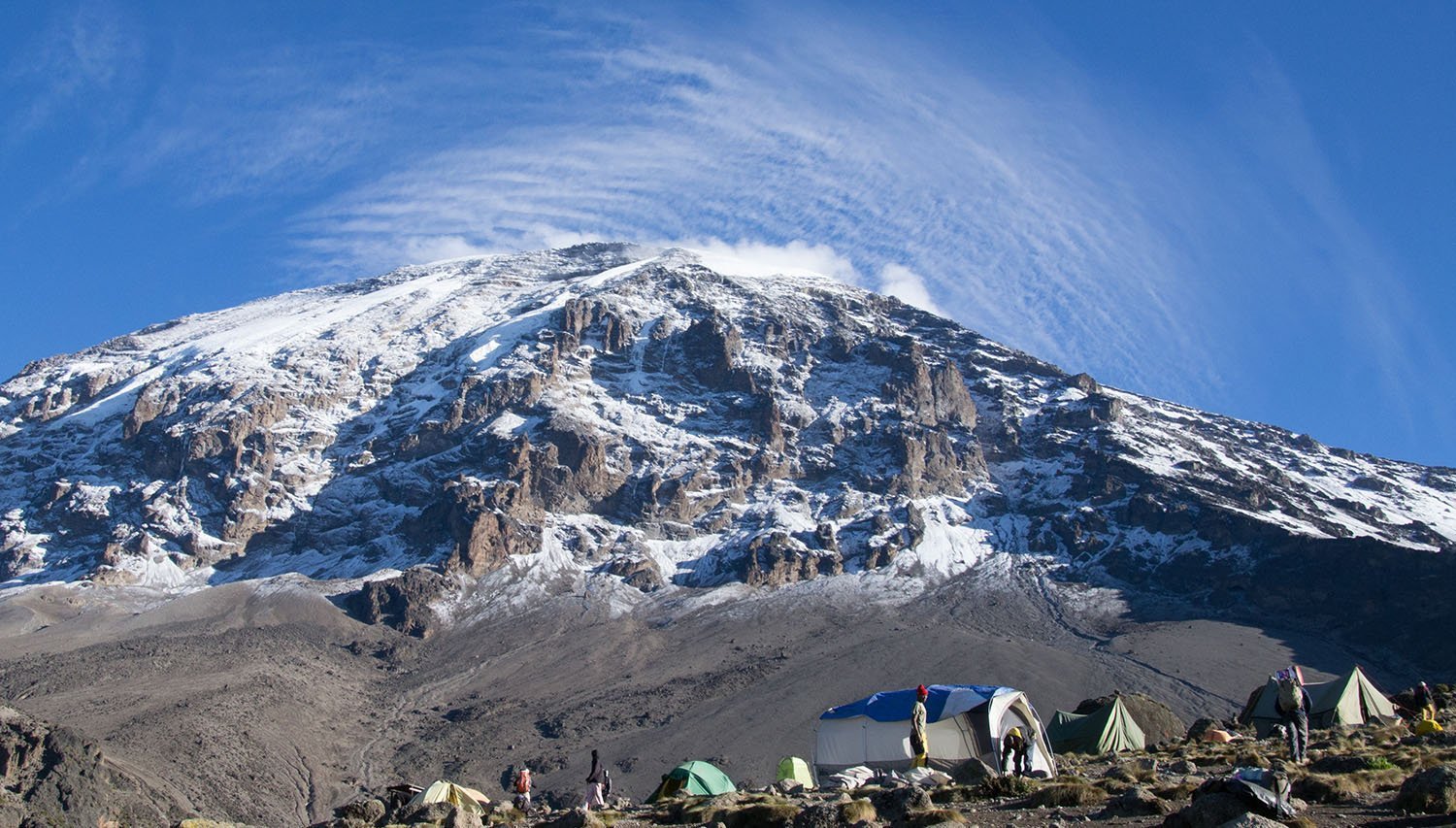 The Umbwe route has a reputation for being the most challenging route on Kilimanjaro. And rightly so. It’s the shortest and steepest of the Kilimanjaro routes and accordingly has a poor acclimatisation profile.

For this reason, its summit success rate is low and its one of the least used trails on the mountain. The Umbwe approaches the summit from the south and camping is the only available accommodation option. Pre-acclimatisation is recommended for those who choose to trek this route.

The Umbwe route is one of the shortest, most direct Kilimanjaro routes, which lowers the quality of its acclimatisation profile. Summit success is low. Whilst there are no official statistics, the average success rate across all Kilimanjaro operators for the five-day Umbwe route is just 50%.

The Umbwe route offers camping accommodation only. For those who trek with Follow Alice, our climbing package includes all of your camping equipment: tent, sleeping bag, sleeping mat and pillow. Further, all tents are pitched and taken down each day by our dedicated mountain crew throughout the trek.

The Shira route approaches the summit of Kilimanjaro from the west. It starts relatively high above sea level and is, therefore, a less frequented route as it offers a poorer acclimatisation profile. The route requires you to camp.

Along with the Lemosho route, the Shira route has all the qualities you could ask for in a Kilimanjaro climb, including beautiful views and varied terrain throughout. The only difference between the two is that the Shira route starts at a much higher elevation: 3,600 m (11,811 ft) above sea level compared with Lemosho’s 2,360 m (7,743 ft).

That’s a difference of over a kilometre! This means that climbers tackling the Shira route are at a higher risk of developing altitude-related symptoms from the first day. As such we recommend opting for the Lemosho route over Shira. That said, we’re happy to recommend the Shira route to those who are seasoned hikers or already live at a high altitude.