National parks in Botswana are set in a uniquely different backdrop to most other African safari destinations. Whilst some African safari destinations have gone for more of a volume-based model, Botswana’s national parks are focused on low volume high yield. This means, yes, they are expensive, however, the quality of the experience is second to none.

The best time to go to Botswana is during the dry winter months from April till September as the days are generally pleasant and the wildlife never wanders far from their water sources.

In summer (December to April), the chances of precipitation increase and in many places the mercury rises to tropical values of thirty degrees Celsius (86 degrees Fahrenheit) or more. This is definitely not the best time to visit, also since prolonged rains may render sandy roads uncross-able, and animals disperse when water is abundant.

In summer, it’s hot all over Botswana and relative humidity increases. In this season you regularly see spectacular sunrises, with the sky above landscape showing beautiful red and purple tones. The best travel time for a safari in Botswana is from May to September, with July and August having the ultimate conditions.

In these months the chance of cloud cover and precipitation is smallest. Just be aware that due to the quite large differences in day and night temperatures, it is important to dress in layers during the local winter. If you go out early in the morning to spot the animals, it can be very chilly. A few hours later, the mercury can exceed 20 degrees Celsius (68 Fahrenheit).

Botswana is a safest country in Africa and politically stable. If you are traveling on an organized trip and staying at lodges and camps, safety problems are very rare. As is the case all over the world, most crime occurs in the cities, and basic safety precautions (such as locking away your valuables at your accommodation) is advisable.

To stay safe on safari, just follow your safari guide’s instructions. When on a self-drive safari, get familiar with the rules of the parks and reserves, never approach animals too close and don’t leave your car outside designated safe areas.

Although crime is rare in Botswana, there are incidents of petty theft and pickpocketing in the cities. You are mostly sheltered from any risk on guided activities. When going out in the city unguided, you can easily avoid problems by following simple safety precautions: seek advice from your hotel before heading out; only take the money you need with you and never wear any valuables; take a taxi after dark. The Okavango Delta is one of Africa’s most famous destinations. There are several private reserves in the delta, as well as Moremi Game Reserve. It offers a true wilderness experience, excellent wildlife viewing and stunning scenery. Walking safaris and mokoro (dugout canoe) trips are a great addition to the usual game drives.

The delta also has over 400 species of birds. With such a wide diversity of species, it is no wonder the Okavango Delta is such a haven for African Safari Lodges. After the summer rains, most of the animals like elephant and buffalo leave for greener grass and trees elsewhere, just to return when winter comes.

The Makgadikgadi Pans National Park is a salt pan – with an area of 3,900 kilometers. Situated in the middle of the dry savanna of north-eastern Botswana. However, it is one of the largest salt flats in the world. Lying south-west of the Okavango Delta and surrounded by the Kalahari Desert.

Makgadikgadi Pans National Park comprises nutritious grasslands, attracting thousands of animals. It is, however, an area of low rainfall and the Boteti River rarely flows to capacity – but often has everlasting pools that attracts waterbuck, bushbuck and hippos.

Journeying into this magical land and across the desolate pans, you will somehow feel its ancient glamour. If you’re planning a Botswana safari – a traveler’s guide to the Makgadikgadi Pans National Park is definitely what you need. 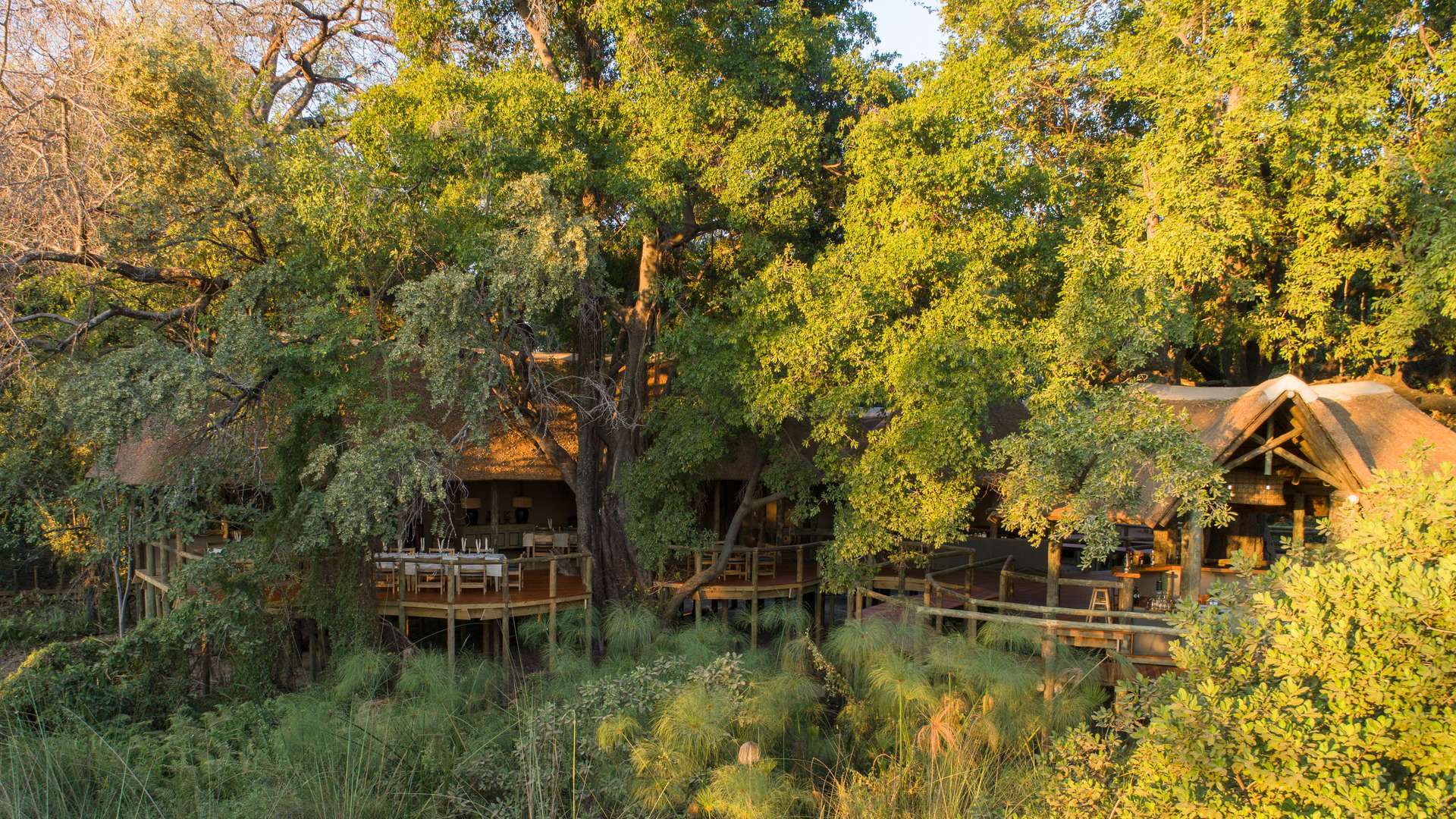 An enchanting blend of grassland, open woodland, near-hidden lakes and the odd large lagoon: this is Moremi. Proclaimed a game reserve in the early 1960s, it lies at the heart of the Okavango Delta – and still features the old pole bridges that hint at the safaris of yesteryear. Key to the reserve is the Mopane Tongue, a dry-land peninsula that is fringed by the beautiful Khwai River and merges into a wilderness of wetland areas.

Just outside the reserve, a scattering of small, comfortable lodges lie along the river; inside, a handful more nestle up near the expansive Xanaxaxa Lagoon, and one or two campsites welcome more adventurous visitors. And then there are the exclusive enclaves of Paradise Island and Chief’s Island.

Arguably of greater significance for Chief’s is that, since the beginning of this century, the island has seen the reintroduction into Botswana of both black and white rhino – a landmark effort linked to exceptional security that has finally seen the return of the rhino into the farther reaches of Moremi – and beyond. 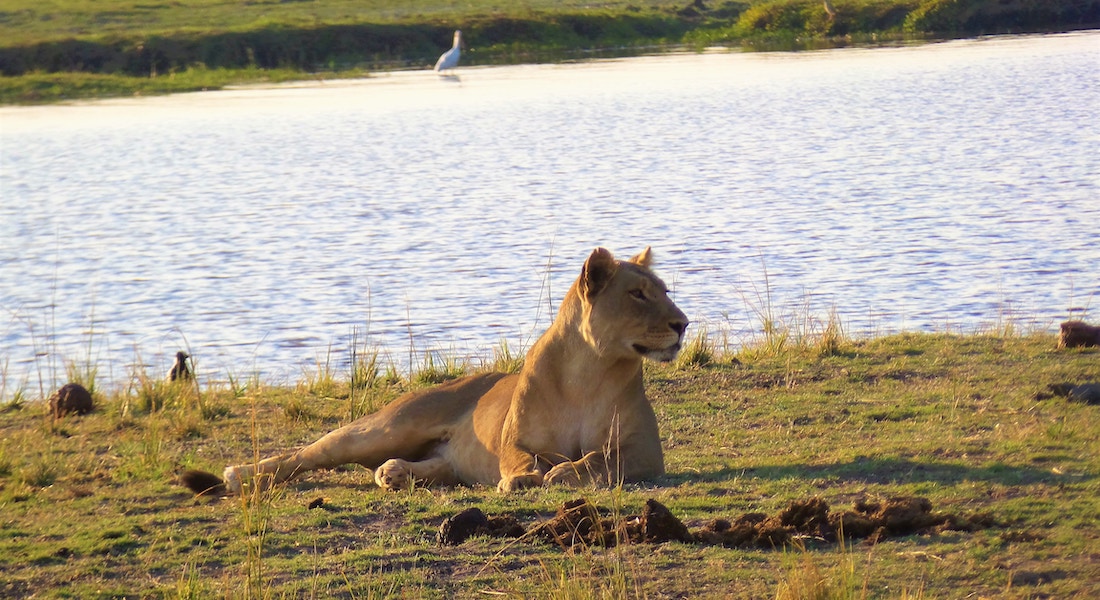 The Chobe is one of Africa’s magical rivers, and the best way to explore the park is by boat. In the late afternoon, big herds of elephant and buffalo come to drink. There are plenty of hippos and crocs in the river, and the birdlife is phenomenal. Predator sightings are easier on game drives.

Chobe offers great wildlife viewing. The park is renowned for big concentrations of elephant and buffalo that come to drink at the river. Other mammals that are usually spotted on the shore are bushbuck and puku. Lions often lie in ambush near the river waiting for an opportunity, but spotted hyena, leopard and cheetah are more easily seen inside the park. Rhino are absent.

You can see animals year-round at Chobe, but the Dry season (April to October) is when wildlife viewing is at its best here, particularly along the southern bank of the park’s broad, namesake river. You’ll also see some unforgettable sunsets across the water at this time, though you’ll be elbowing the high-season crowds while checking them out. 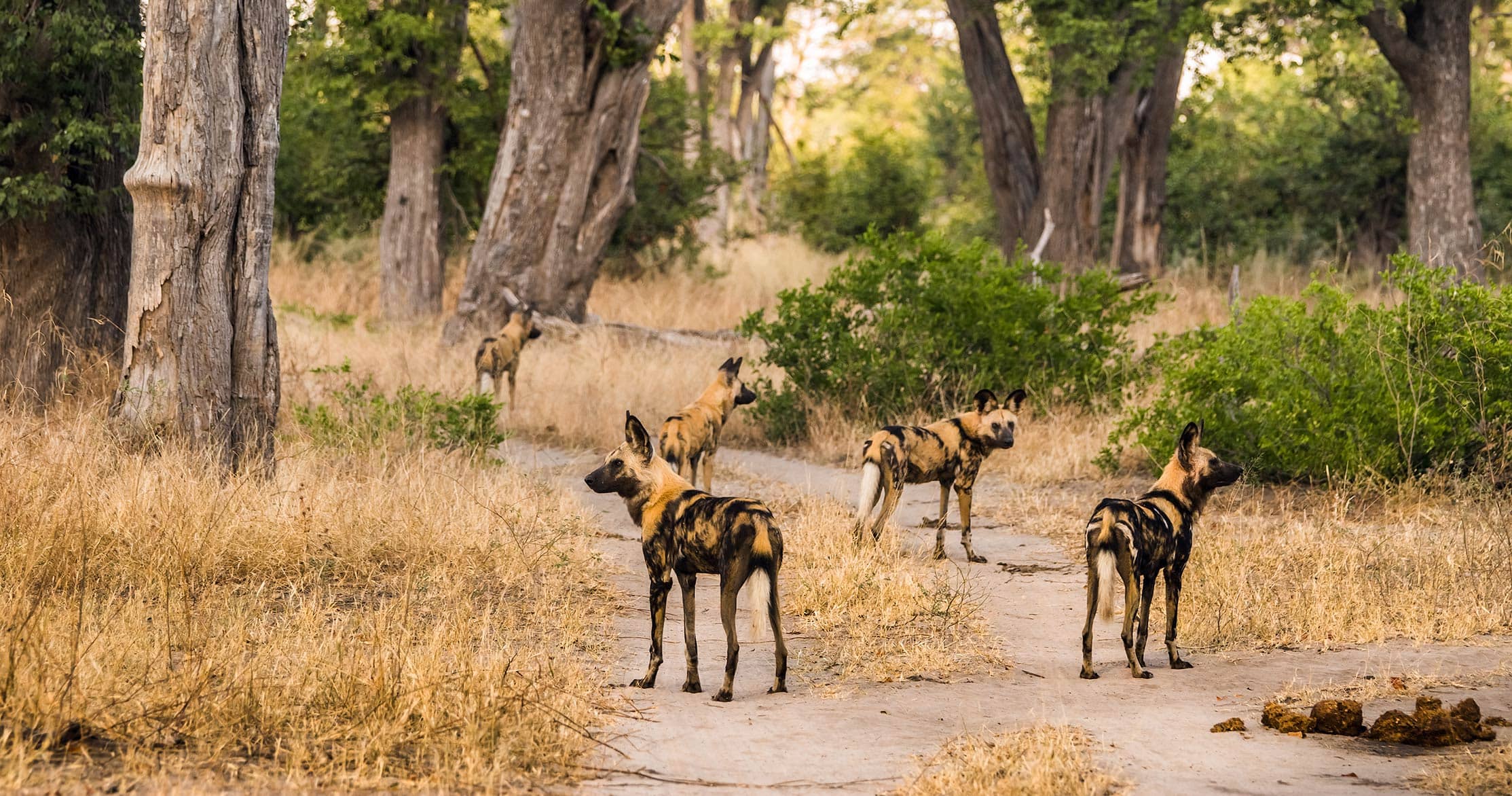 Kgalagadi Transfrontier Park is a merger of Kalahari Gemsbok National Park in South Africa and Gemsbok National Park in Botswana. Most tourism happens on the South Africa side, which has excellent facilities. The Botswana side only has very basic campsites. The red sand dunes in the inhospitable desert form a magnificent backdrop for wildlife viewing and photography.

The Kgalagadi is not a Big Five destination, as it has no elephant, rhino or buffalo. Animal numbers are lower than in more classic safari destinations, but the open terrain makes for very good viewing. Predators are the park’s biggest attraction. These include leopard, cheetah, spotted and brown hyena and smaller species such as bat-eared fox and Cape fox. Lions are numerous and males are known for their spectacular black manes.

The period of transition from the Wet season (October to April) to the Dry season (May to September) is the best time for wildlife watching. The worst of the heat will have passed, and there’ll be enough water in the rivers to draw lots of animals. Just remember to pack plenty of warm clothes to deal with plummeting temperatures in the evening, as well as the chilly morning air. 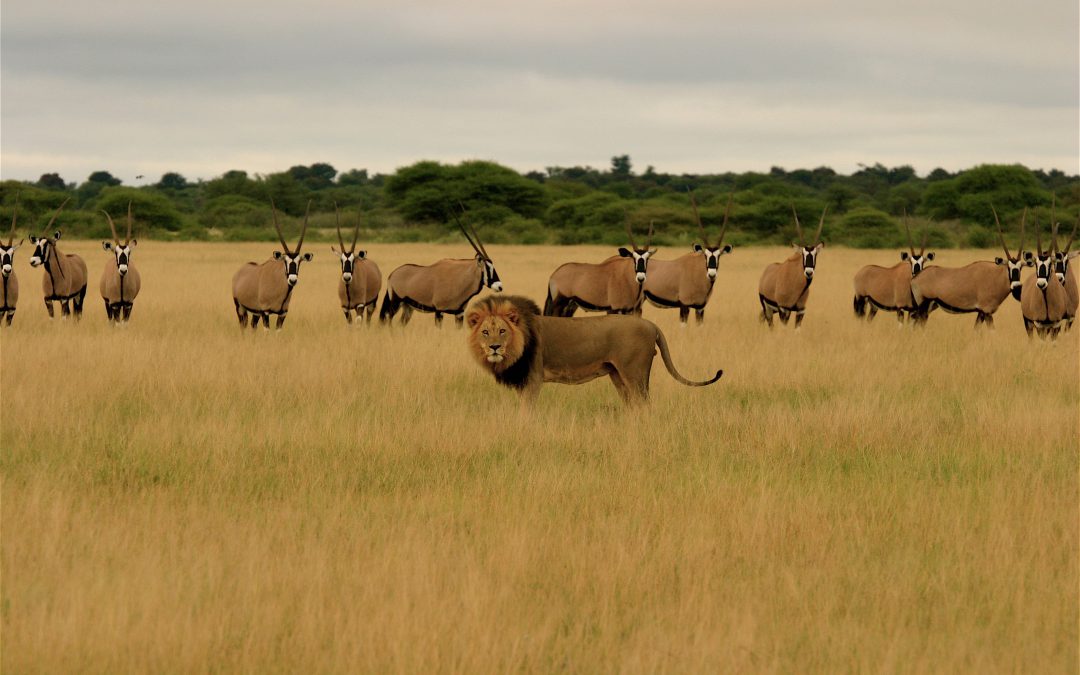 The Central Kalahari Game Reserve is Botswana’s biggest reserve and is situated in the middle of the Kalahari Desert. This is pure, untrammeled wilderness. The inhospitable desert habitat doesn’t support the wide variety of safari animals found in greener destinations – but sightings in this arid landscape are special.

Big herds of desert-adapted antelope, such as springbok and oryx, can be seen walking along the dunes. Predators are easy to spot on the plains. The Kalahari black-maned lions are particularly stunning, and cheetah thrive in this open country. Lucky visitors might even come across a pack of wild dogs or a solitary honey badger.

For prime wildlife viewing and fewer crowds, you should avoid the driest times of year and visit in the Wet season (November to March). Besides the low-season prices, this is also when animals make the most of the returning rain by gathering around the pans in Deception Valley. The trade-off is that some roads can turn into muddy bogs. 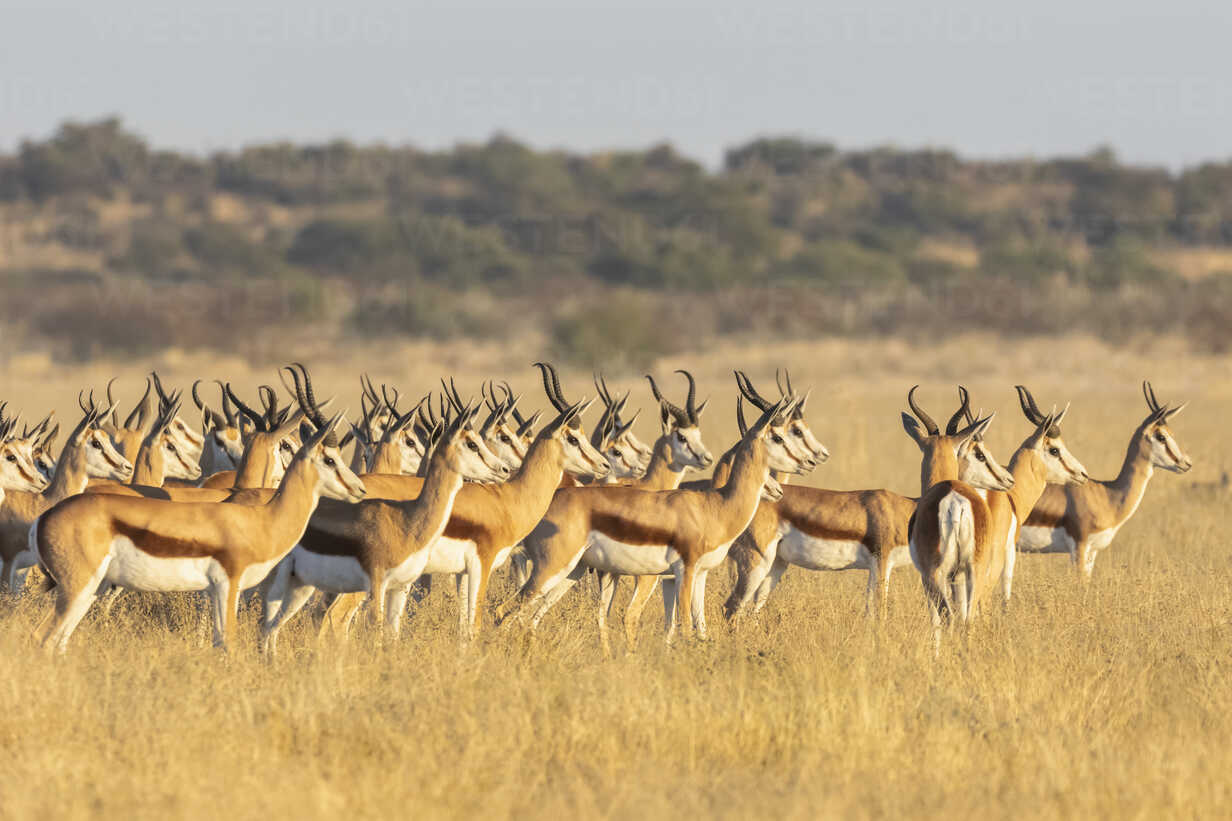 The fascinating landscapes, a group of seven mighty baobab trees – the famous Baines Baobabs – as well as a waterhole frequently visited by a pride of lions are the main highlights of the Nxai Pans National Park. The park derives its name from a curved stick ‘Nxa’, which the San used to dig out springhares and which the form of the park resembles. The area of the park belongs to the settlement area of the San (Bushmen).

The Nxai Pans National Park is situated on the migration route of large animal herds moving between the Okavango Delta, the Hwange National Park in Zimbabwe and the grasslands in and aroud the Magkgadikgadi Pans National Park. Lions, giraffes, kudus, jackals, springboks, impalas and bat eared foxes can always be found in the park. During the rainy season from December to April oryx antelopes, elephants and thousands of zebras enter the park. Ostriches and numerous bird species add to the game viewing experience.

This vast, unspoiled wilderness area in Botswana’s northern region comprises the extensive Kwando/Linyanti River system. Game-rich and scenic, this area is more remote than some of the other game reserves in Botswana. It offers private, informal safaris without any of the restrictions of national parks. Expect night game drives, bush walks, off-road game drives, canoe and mokoro game viewing and even horseback riding safaris.

This sprawling, extensive wilderness area consists largely of privately owned and managed concessions. The four main reserves in the area include the Kwando, Selinda, Linyanti and the Chobe Enclave. It lies in the remote northern reaches of Botswana and adjoins Namibia’s Caprivi Strip. It’s also where you’ll find the Selinda spillway (which connects the Okavango to the Kwando and Linyanti waterways), a popular water-based canoeing safari destination. 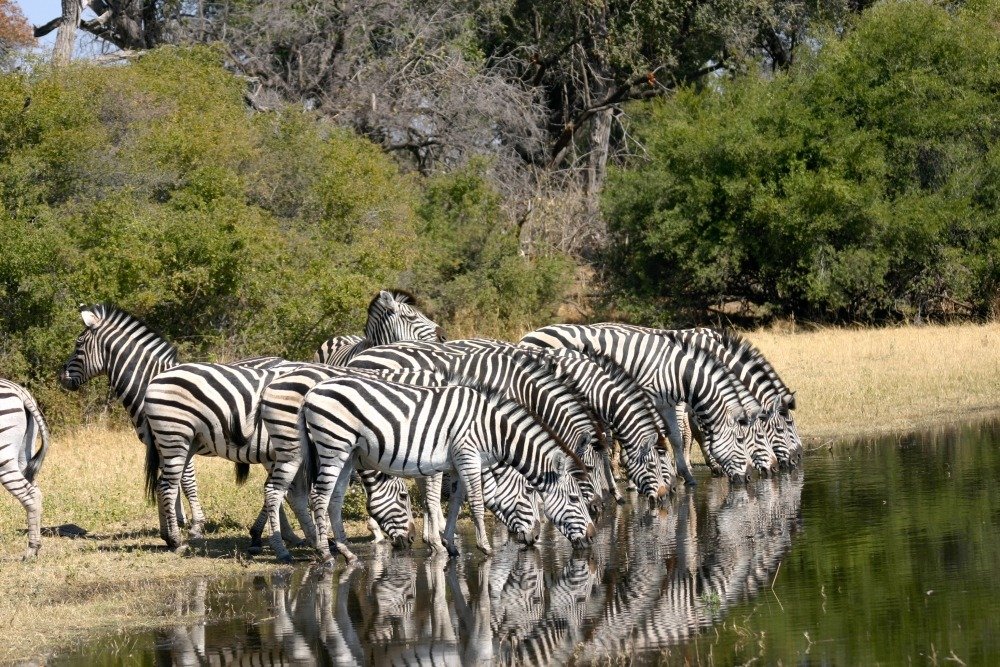 Mashatu is part of the Northern Tuli Game Reserve and is one of the largest private reserves in southern Africa. Mashatu only has three of the Big Five, with rhino and buffalo absent, but elephant and leopard sightings are unparalleled. The exclusivity of the reserve with very limited vehicles out on game drives makes for quality sightings. Even more so due to the sparse vegetation.

Elephants are the star-attraction in Mashatu, but predators are well represented too. Leopards are very common, and a lot of individuals are habituated and easy to follow. Lion, wild dog, spotted hyena and cheetah can all be seen. Smaller predators regularly spotted include African wild cat, bat-eared fox and black-backed jackal. Giraffe, zebra, wildebeest and a variety of antelope species, are all found in this sparse habitat.

May to September, which is the area’s Dry season, are the best months to visit. Mild temperatures make the game drives more enjoyable, and wildlife viewing is generally superb. December to February can be uncomfortably hot with peak temperatures sometimes hitting 45°C/113°F. 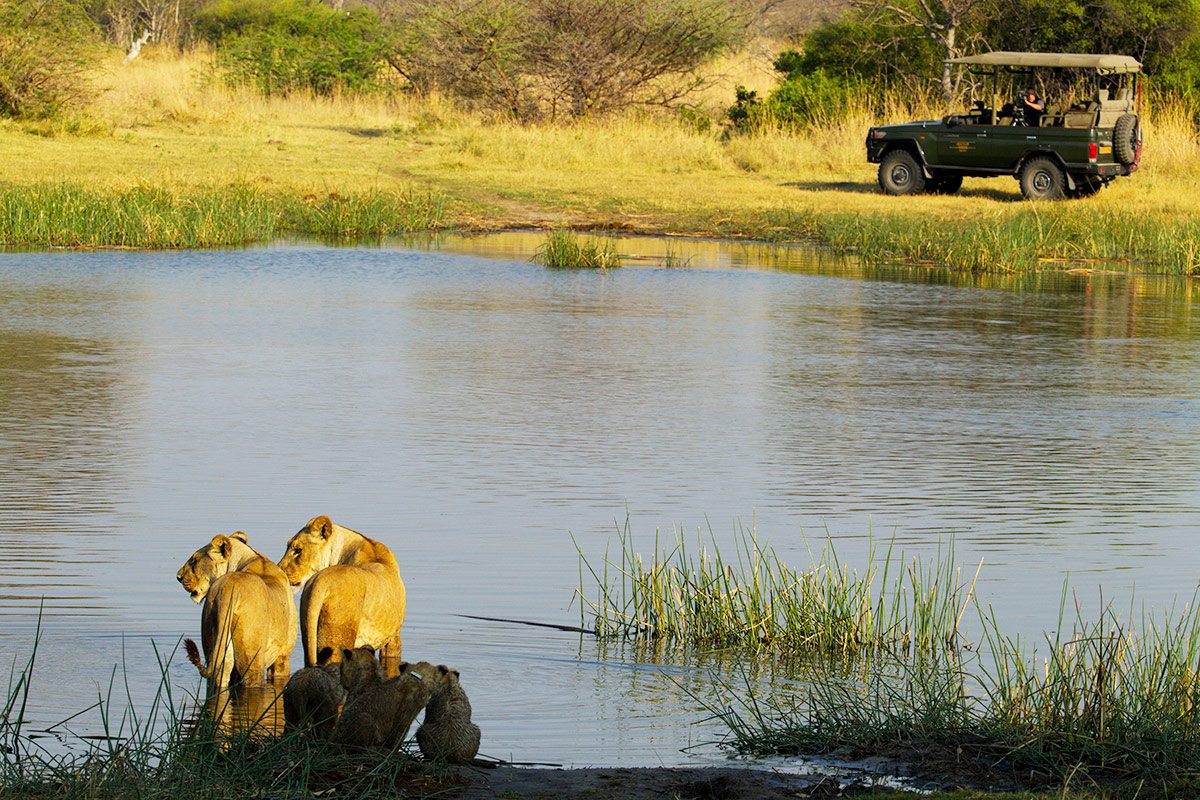 Khutse is a popular weekend retreat for Gaborone residents. It is adjacent to Central Kalahari GR, and it has the same arid habitat. There are no fences between the reserves but wildlife densities are lower in Khutse. This place is more about getting away from the city for a couple of days than intensive wildlife viewing.

Common antelope species include springbok and gemsbok. Other animals to look out for are giraffe, wildebeest, kudu and hartebeest. The most common predator is the black-backed jackal, but lion, leopard and cheetah are all present as well. The desert-adapted brown hyena can sometimes be spotted in the early morning or late afternoon.

The Wet season (November to March) is the best time for wildlife spotting in Khutse. After the rains have broken, animals flock to the filled-up pans to quench their thirst, which makes for quite a spectacle. This is also the time of year when babies appear, which attracts the attention of local predators.