Arusha city is located in the north-eastern corner of Tanzania. It was named after the local tribe Wa-Arusha, who is also known as Larusa by the Maasai. Arusha is home to approximately 1.7 million people where about 740,442 live in the urban area/city (NBS Census 2012), making it the third-largest city in Tanzania. The population growth rate is tagged to the national average of 2.7%.

Arusha city is a global tourist destination and is the centre of the northern Tanzania safari circuit. The city is surrounded by several national parks and reserves, but predominantly, at the close proximity of Mount Kilimanjaro the highest free-standing mountain in Africa.

Approximately one hour drive from the city centre, Ngorongoro Crater where surprisingly humans coexist in harmony with the wild, and the Serengeti National Park which is home to thousands of wild animals, including the fascinating wildebeests and zebras migration. The three were recently declared among seven natural wonders of Africa, making it the best safari destination in the world.

A few miles away from the city, you will find the Mererani mining site, where the Tanzanite gemstones are found. The jewel that is 1000+ times rarer than diamonds is only found at the footsteps of Mount Kilimanjaro in the United Republic of Tanzania.

One of the most popular dishes of Arusha is Nyama Choma, a northern Tanzanian barbecue dish. Nyama Choma is properly served with a side of Pili Pili sauce and a cold local beer or soda. Indeed, Arusha has always been on the list of the must-visit places and the destination of choice to many. 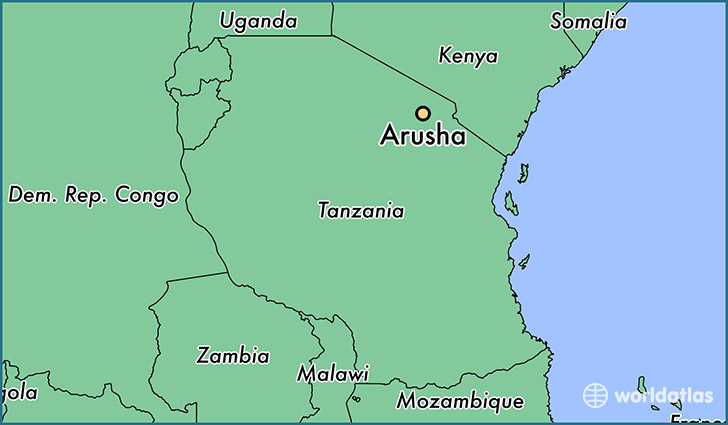 Arusha is located in the northern part of the country. The City is found at the foot of Mount Meru on the eastern edge, part of the Great Rift Valley; the location of Arusha city is the attribute to its cool temperate climate.

The City is in the vicinity of the Arusha region with an elevation of 4600 ft and has a population of about four hundred thousand mixed with backgrounds such as indigenous African, Arab-Tanzanians, and Indian-Tanzanians.

The City is the safari capital of Tanzania where visitors planning to travel across different sites of Tanzania make it a starting point that connects them to their destinations.

2. How to Get to Arusha Town

Charter flights are usually booked by tour operators as part of the tour package. Domestic flights to Arusha or Kilimanjaro can be booked with various local carriers:

The temperatures of Arusha range between 13 and 30°C, due to the town’s location on the southern slopes of Mount Meru at the altitude of 1,400 m. The average temperature is around 25°C. The two major industries of Arusha are agriculture and tourism.

4. Things to do in Arusha City

Established in 1959, the Ngorongoro Conservation Area is home to the volcanic Ngorongoro Crater and boasts a wealth of majestic animals such as elephants, lions, leopards, buffaloes and rhinos, as well as herds of wildebeests and zebras, which migrate annually through the plains. Other highlights include the hominid fossils in the Olduvai Gorge, which date back millions of years. The area is part of the Serengeti and borders the southern plains.

The highest mountain in Africa, Mount Kilimanjaro is a dormant volcano rising 16,100 feet. First climbed by Hans Meyer and Ludwig Purtscheller in 1889, the mountain belongs to the Kilimanjaro National Park and is popular among climbers, hikers and safari enthusiasts. The mountain has three volcanic cones – Kibo, Mawenzi, and Shira. There are seven official trekking routes, including Lemosho, Marangu, Mweka, Rongai, Shira, Umbra and Machame, which is considered the most scenic and steepest.

The sixth-largest park in Tanzania, Tarangire National Park, located in the Manyara Region, is divided by the Tarangire River. Known for its large populations of elephants, zebras, wildebeests and cape buffaloes, which are attracted to its freshwater reserves, the landscape also features Acacia and Commiphora-Combretum woodlands and Baobab trees. Stretching over 1,100 square miles, the area also features waterbucks, giraffes, impalas, and vervet monkeys, as well as predators such as lions, leopards, cheetahs and wild dogs.

Founded in 1960, Lake Manyara National Park, a 130 square mile park, is a renowned bird watching and information centre. Consisting of 130 square miles of arid land, forests, and a 77 square mile soda-lake during the wet season, the park is home to leopards, East African lions, leopards cheetahs, elephants, blue monkeys, gazelles, hippos, Masai giraffes, impalas and zebras. Near the hippo pond, visitors are free to observe the animals from outside their vehicles in safety. The centre also contains a popular gift shop.

A place where the culture and creativity of Tanzania’s more than 120 tribes are gathered together, the Arusha Cultural Heritage Centre features a collection of carvings, gemstones, artefacts, clothing, jewellery and books. Established in 1994, the centre is popular among visitors looking for souvenirs, including beads, precious and semi-precious jewellery, spices, antiques and wood carvings. Among the stones offered by the centre, guests will find rubies, emeralds, tsavorite, diamonds, sapphires and opals, as well as tanzanite – a rare violet stone indigenous to the country. The centre also showcases artworks, such as sculptures, contemporary art and paintings from local and international artists, as well as a traditional restaurant.

If you want to experience Tanzania at the local level, then you need to try cultural tourism in your time here. It is at this time you will be able to experience the Tanzania local foods, local public transport mostly known as ‘vipanya or dalla dalla’ or you can explore other options like motorcycles that are mostly referred as ‘bodaboda’ here in Tanzania.

If you like some safari options, then cultural programs may well, save the day as they are simply among the best things to do in Arusha. Apart from visiting families in Maasai bomas, for example, a visit to the two museums in; Arusha Natural history museum & Arusha declaration museum both in Arusha will bring you Arusha and its history & culture up close and personal.

Do you like swimming? Ok, I bet I couldn’t ask my question very well. Do you like to swim in the warm water? You probably do. Chemka hot springs give you just that opportunity.

Originating from underground of Mount Kilimanjaro, the springs are naturally warm and they form a beautiful pond of up to 10 meters in some places. The unique thing about Chemka hot springs pond is that even at the point where the pond reaches 10 meters, you may clearly see its bottom with a clear stunning view.

Many tourists like to pick this beautiful pond as their top among the best things to do in Arusha simply because it is unique but yet affordable.

Located just 25km west of Arusha Meserani offers best things to do in Arusha for those who are snake lovers and at the same time have just a few hours to spend on the tour.

The park has one of the best snake based guides in Africa and they will guide you to learn a thing or two about some of the deadly snakes on the planet like Black and green mamba, Egyptian cobra and puff adder. Crocodiles are also available for you to have the closest view you need. You may even touch the baby crocodile if you will like it too.

If there is one best area to visit in Arusha for a family tour, Themi should be one of them.

Themi Leisure Park has one of the best things to do in Arusha from viewing waterfalls, a mountain hike, partying and picnicking nature walk and birding without forgetting hiking for site seeing.

In under 5 hours, you will have already visited this amazing park, see and do whatever you like and off you take your next adventure.

I will really struggle to remember myself seeing the greener and very good looking nature in Tanzania than the one in Materuni village. Materuni village which hosts 80m+ high waterfalls can be reached in less than 2hrs from Arusha town and there you will enjoy among the best things to do in Arusha.

Vijiji is a Swahili word that translates to villages

With this day tour at less than 10km from Arusha city centre, you will find plenty best things to do in Arusha. In this day trip or a semi-day trip if you will, prepare yourself for about 3hr guided walking safari to the neighbouring Meru village where you will have a unique opportunity to visit small locally owned coffee farms on the slopes of Mount Meru.

The best time to visit Arusha National Park is from June to October, during the dry season. It is easier to spot the wildlife – since they normally gather around the waterholes, rainfall is minimal, vegetation is not too thick and mosquitos levels are reduced.

However, when you’re visiting make sure you carry warm clothes for the morning game drives since the early mornings of June all through August are cold. From November to December and March through May – the rains transform the landscape as lush, green grasses emerge and this is also the best time to witness the migratory birds.

To provide our customers with unbeatable rates at hand-picked hotels, Agoda.com represents a full range of hotels from 5-star resorts to budget-priced properties in Arusha. Whether traveling for business or leisure, Arusha is an outstanding city to visit with over 483 hotels to choose from. Many areas, each with a distinctive atmosphere, are just waiting to be discovered across the city. Arusha has many attractions to explore with its fascinating past, intriguing present and exciting future. If you wish to pray or contemplate amazing architecture, 5 places of worship await you. If you’re looking for a room in Arusha and don’t want to pay too much, Agoda.com offers hundreds of fantastic deals which are updated daily.

7. Safety and Security in Arusha City

generally, Tanzania is in our view, safe to visit. This is even more so if you book an organized safari. Theft and pickpocketing is relatively common in big cities but incidents are easily avoided when using a few simple safety precautions. Almost a million tourists visit Tanzania every year, and most visits are trouble-free.

Most crime in Tanzania is in the cities (as is the case throughout the world). Petty theft and pickpocketing are quite common, but violent crime is very rare. You are unlikely to encounter any problems on a guided tour. Venturing out in the cities unguided is fine as long as you follow a few simple safety precautions: check with your hotel whether the area is safe to walk; only take a bit of cash with you; don’t display any valuables; don’t walk around after dark. For more safety tips that apply to African cities in general: